The first wave of CITIC Pacific Mining employees to achieve a decade’s service at Sino Iron have joined CEO Chen Zeng at events in Karratha and Perth, to celebrate their role in creating a new iron ore downstream processing industry for Western Australia.

When the 57 staff members commenced in 2008, the project comprised little more than a small sample pit, some preliminary clearing and a few sea containers and temporary accommodation units.

“The helicopter pilot wasn’t even sure whether we’d landed at the right place, the first time we flew in.

Mine Supervisor Geoff Thompson, who lives in Exmouth with his young family, described the last 10 years as “epic”.

“It’s a good feeling knowing you were there when it all started, helping transform a bare-bones bulk sample pit into a world-class mining, processing and export operation,” Geoff said.

Today Sino Iron is home to a mine, port and a massive six-line magnetite processing facility, serviced by a gas-fired power station and desalination plant which are among the biggest in the State.

Already the State’s 11th biggest exporter by value, CITIC will spend an estimated $51 billion on goods and services in WA over the life of the project.

“Ten years ago, these staff started with a company unknown in Australia, on a type of iron ore which had never been mined, let alone processed and exported from the Pilbara.

“They came from all walks of life and for different reasons, but had one thing in common - a pioneering spirit which is the essence of Sino Iron.

“We’ve overcome many challenges along the way and some of these issues still need to be resolved. But thanks to the hard work of our employees, the value and potential of Sino Iron is now there for all to see.

“I’m very proud to lead such a dedicated team. Together we remain focused on putting Sino Iron on a long-term sustainable footing for the benefit of all.” 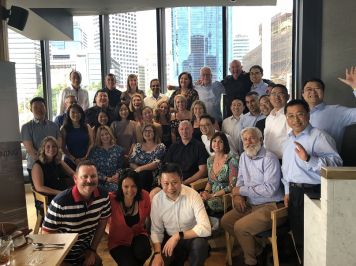