Australia’s largest magnetite mine will spend approximately $51 billion in procurement of WA goods and services in the coming years, according to new analysis from economic consulting firm Deloitte Access Economics.

CITIC Pacific Mining CEO Chen Zeng said the campaign would highlight the significant value Sino Iron had already delivered to Western Australia, including an eight-year construction phase, and the ongoing benefits the State could expect over the next 40 years.

“In the past decade, we’ve evolved into Australia’s biggest magnetite mining and processing facility, helping secure a new industry for the Pilbara,” Mr Zeng said.

This week Sino Iron achieved its 2017 annual production target of 15 million tonnes of magnetite concentrate – a 36 per cent increase on the previous year.

“Iron ore is being value-added here on Australian soil. This product is an increasingly important feedstock for steel mills in China. We’re now responsible for more than 60 per cent of magnetite concentrate exported from Australia to China and have become a major seaborne supplier.

“Next door to our Concentrator is mainland Pilbara’s biggest, cleanest combined-cycle gas-fired power station. And down at the port we’ve built a state-of-the-art, large-scale desalination plant.

“We’re more of a giant, open-air factory than your typical mine - we’ve become a hub for magnetite processing expertise in this country,” Mr Zeng said.

“Our investment in all of these facilities is bringing new technology to Australia and amazing career opportunities for Western Australians.”

Sino Iron currently has 1500 employees and another 1100 full-time contractors. Over the life of the project, it will support on average an estimated 3,123 direct full-time equivalent jobs across WA, and a further 1000 jobs across Australia, every year.

Sino Iron also supports an additional 3,114 indirect jobs in WA, mainly through suppliers to the project. More than $5 billion will be paid to the WA Government in royalties — equivalent to 140 new schools or two tertiary hospitals. Close to 98 per cent of staff are Australian residents, with the vast majority living in Western Australia.

“We’re proud to be delivering enormous value through our operations to date, in partnership with the State of Western Australia,” Mr Zeng said.

“Our challenges are well known. We remain focused on doing everything we can to place Sino Iron on a financially sustainable footing, to ensure the project reaches its full potential, for the benefit of all.

“We will only be able to achieve this through better partnerships.”

For more information, go to betterpartnerships.com.au

Note: All $ figures are expressed in Australian Dollars. 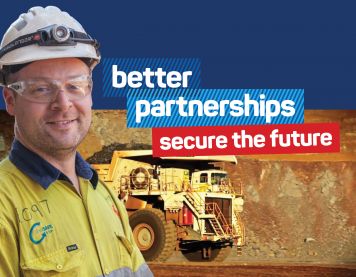