An invasive marine pest monitoring program supported by CPM has recently received one of the top acknowledgements at the annual Golden Gecko Environment Awards.

The program is run by the Department of Primary Industries and Regional Development’s Aquatic Pest Biosecurity section and CPM has been an active participant since 2014.

Senior Environmental Advisor Brendan White said it was fantastic to have the program recognised with a Golden Gecko.

“The monitoring program is about identifying potential marine pest incursions early, should ship quarantine controls fail, to allow for treatment before these pests are able become established in Cape Preston’s waters”, Brendan said.

Introduced marine pests include barnacles, sea-squirts and Asian green mussels, which can threaten local wildlife and industry if allowed to spawn undetected in WA ports.

“Marine organisms can attach themselves to ship hulls and can also be transported in ballast water from international waters.

“We have really stringent quarantine controls in place to minimise the likelihood of marine pests entering the Cape Preston Port on international vessels.”

“Aquatic Pest Biosecurity provide us with the equipment and conduct the genetic analysis of the samples, and we do the field work, sample collection and dispatch.”

The settlement plates are hung in the water for two months, collected and then provided to Aquatic Pest Biosecurity. These samples are then sent for scraping and blending into a soupy concoction for testing at Curtin University.

The ‘soup’ is tested for any DNA match with introduced marine pests, a cost-effective, accurate data collection method that helps early detection and identification of marine pests along WA’s coastline. 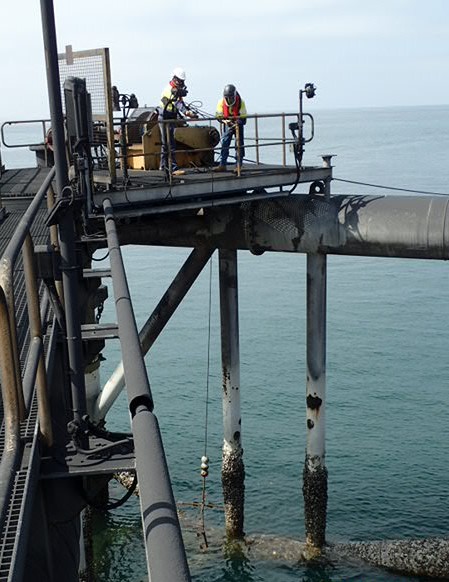